In one of the rooms or transitory spaces (staircase, hallway) of the Winter Palace takes place a dance of migrant workers and ballet dancers .(Vaganovskoe uchilishe). It is a performance with a structure: first the ballet dancers teach the migrants how to dance, then the opposite. We install their national women’s dresses. In the first part the dresses are “seated” around in the chairs. In the second part these dresses are hanging from the ceiling. There is a figure of a moderator who directs the dance, like a conductor. This figure looks without gender, as an androgyn. END_OF_DOCUMENT_TOKEN_TO_BE_REPLACED

Trilogy: The Triumph of Fragility, Immersion

Our film refers to the novel with the same name of the soviet writer Alexander Green. It is about eternal hope that will never leave peoples hearts. We made our film in Kronstadt, a famous historical place during the 1917 revolution. The central point of the film is the conflict between two generations, two different structures.
We proposed a utopian ending in our film.

The film has the structure of an ancient Greek tragedy. Mothers explain their problems and the chorus which is constructed of the typical social characters is judging her. The film is dedicated to contemporary motherhood.

D. I remember that when you and Tsaplya started working together, you tried to distance yourselves from any attempt at locating your work within the framework of feminist tradition. But at the same time, you also cooperated with some of Petersburg’s key figures in the feminist cultural discourse, such as Alla Mitrofanova and Ira Aktuganova. What has changed in recent years? How would you re-sketch your position today?

G. Our art has always addressed the inner world. It’s always been about the poetization of ordinariness, so that life would stop being so dull and depressing, so that the routines of everyday life would take on the infinitely gripping spirit of a performance. Tsaplya and I were drawn together by a love for adventure; END_OF_DOCUMENT_TOKEN_TO_BE_REPLACED

Diffused in a variably sized and constituted collective, averting authorship and working across discipline and media, yet celebrating the aura of the artistic object and operating from a position of moral certainty; the work of Natalya Pershina and Olga Egorova is testimony to the idea that post modernity is a nascent form of modernism. The movement of modern art toward pure line, colour, form and space of the ‘internationalist ideal’ is reversed in the work of Gluklya and Tsaplya (Natalya and Olga’s artists pseudonyms) and their Factory of Found Clothing (FNO) who engage directly with the world around them in their various interventions. END_OF_DOCUMENT_TOKEN_TO_BE_REPLACED

Marina Vischmidt in conversation with the Factory of Found Clothes

The Factory of Found Clothes (Fabrika Nadyonii Odezhdii in Russian, or FNO for short) is Natalya Pershina-Yakimanskaya and Olga Egorova, respectively known as Gluklya and Tsaplya. Founded in 1995 in St Petersburg, FNO have used installation, performance, video, text and ’social research’ to develop an operational logic of ‘fragility’ as subjectivity antagonistic to that which is the state of things – be that the repressive social and political climate of Russia or the reflexive futilities of international art scenes. END_OF_DOCUMENT_TOKEN_TO_BE_REPLACED

The Labor and Breath of Romanticism

In the art world, Natalia Pershina-Yakimanskaya and Olga Egorova are better known as Gluklya and Tsaplya. Residents of Petersburg, they have worked together for many years, producing performances, installations, and video works. Their work extends beyond the confines of gallery art. For example, Gluklya and Tsaplya’s videos have been screened several times at the Oberhausen International Short Film Festival, one of the major forums for international contemporary visual art. Film critic Anjelika Artyukh met with them during this year’s festival.

Anjelika Artyukh: You formed your artistic alliance in the mid-nineties, when you called yourselves The Factory of Found Clothes and you chose clothing as your object of conceptualization. Why exactly did clothing become the object of your artistic practice? Does it retain its importance for you nowadays, considering that your art has become more socially engaged?

Tsaplya: The culture of the early nineties was a culture of living. It was bound up with dandyism, with dressing up. END_OF_DOCUMENT_TOKEN_TO_BE_REPLACED 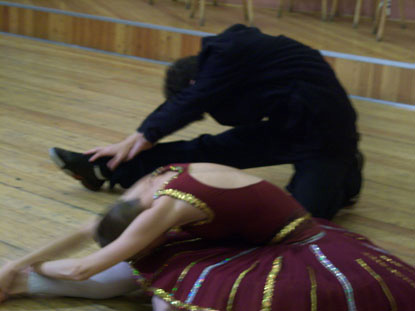 Our project has its origin in a real story. Our friend has told us about her husband who had been fired and was so terrified that run away to his mother’s place. He was ashamed to look in his wife’s and children’s eyes as it is said: ‘A man without a job is like a horse without a saddle’. The wife and children kept telling him: ‘We love you the way you are, we don’t care if you’ve got a job or not’. But he was devastated. He started drinking and nearly became a drunkard, but suddenly a miracle happened. He found a new job, his wife started working too and the story had a happy ending.. END_OF_DOCUMENT_TOKEN_TO_BE_REPLACED