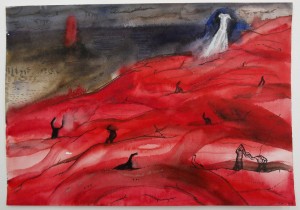 This drawing was made after we have gotten an invitation to exhibit the group chto delat in the legendary  ICA /London . After a several years of the official refusal and the persecution of the group in Russia it was important moment of the international recognition .
Scarlet sails is a symbol of the highest target /a sublime dream . We can see the last convulsions of the black costumes ,peddled in the red sea  . Black costumes symbolizing the implementers of the society . White dress in the hill it is a victory of course ).It is relating with the our FFC film Scarlet Sales which based on the story of the soviet writer Alexander Green about the immovable believe to the miracle  and a dignified dream ,written in 1916-1922.