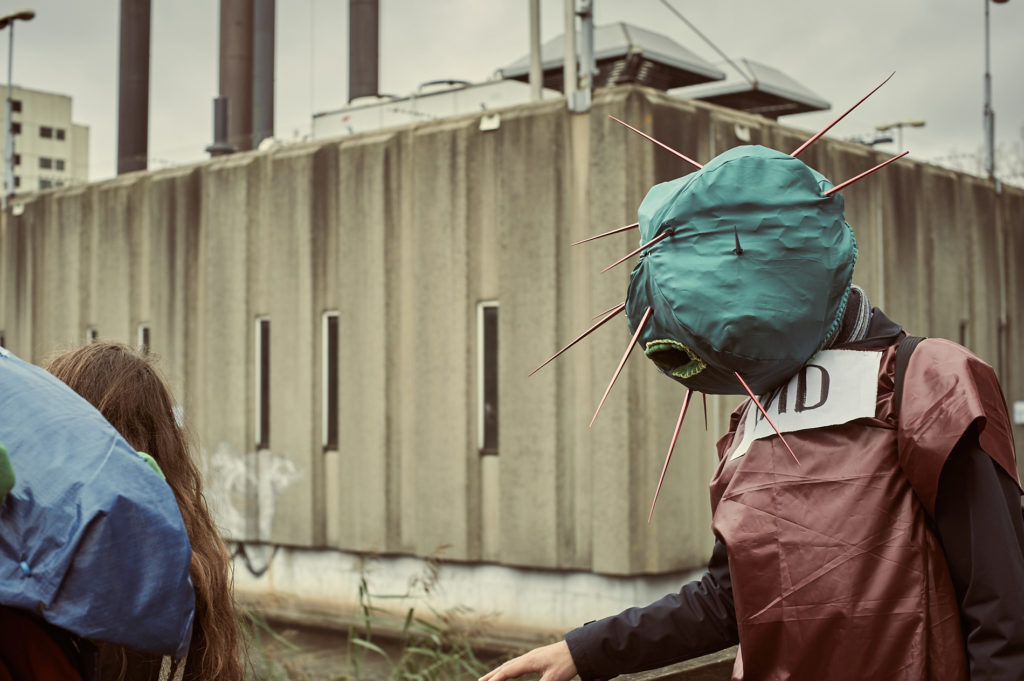 Carnival of the Oppressed Feelings, Amsterdam 2018

We call out to you courageous creatures without jobs, visas and or status, Mothers and children, Lions, Eagles and Partridges, Winged deer, Fish, and Algae and Sea Wheat and all microorganisms, witnesses of migrants drowned on their way to Europe and to the destroyed houses and the suffering people from wars, in a word, all lives, that completed their sorrowful circle now embodied as nomadic artists. You are the new people, born from globalism, who have speed up the circulation of their cells to an impossible degree. The collective world soul is in all of us. In us dwells the soul of the great free spirits, and also the smallest leech. The strands of cosmic consciousness are interwoven in us and we remember everything, everything, everything and we relive every life over again within ourselves.

– Whose side are you on? The masters of culture, was asked long ago by Maxim Gorky.

– Artists are on the side of the weak, said Gluklya and Tsaplya.

– Where is equality, I asked the birds and they flew far away.

– Where is equality, I asked the art teacher with degrees from three different European institutions

– There is no equality, he said, and that in itself is equality.

But there is equality between Refugee and Artist! We have found it!

Imagine Schiphol Airport becoming a Theatre of the Utopian Union of Unemployed People!

All new arrivals in the European Union and residents together will be actors of their own play, the play which is training mussels on the sense of true equality and justice. The European Citizenship will be judged according to the Demands of the New Theatre:

Capability to reinvent yourself and move further!
These are the new demands for issuing a visa to the e world civic theatre: the start of a new society.

The new revolution will come!

We need it in order to stop the frightful course of impossible alienation and stop the destruction of the planet by means of the new attainments of equality.

There is no other way for us!

And here we are out in the street.

We do not agree that the streets where we used to shape our society should be given away. The street should be of the people. Let’s subvert the ossified order of things.  Down with idiotic expensive shops!  Down with the elite order of shiny trinkets that bring happiness to nobody! Down with gentrification and the brazen despotism of developers!

Architects! Do not submit! Turn down such projects! Artists! Writers! Musicians! Ecologists! Philosophers! For the sake of Refugees and all creatures: join the Utopian Unemployment Union!

Join the Potato eaters party for resistance, the Monster party for overcoming of fears, the Language of Fragility party to express your feelings, the Recycling Prison party to overhaul the system and, the Spirit of History party to bring new life to the Revolution!