In 2004 in Stockholm, Gluklya and Tsaplya mounted The Garden for Businessmen, a performance involving 12 businessmen, which posed the questions, as Gluklya puts it: “What is this person except his profession? Is there any life except their business? Who are they as a human? That’s why we proposed to make a kind of dance, with them holding little girls’ dresses representing the more vulnerable, more fragile, part in them.” 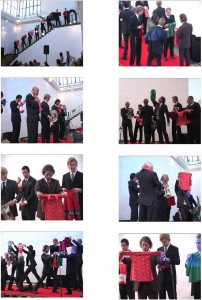 The interplay between performance and sculptural object is played out in Garden for Businessman’ where immaculately suited professionals extemporize and perform with children’s clothing in a quintessentially modern corporate environment. In both cases the protagonists play a central role in determining the nature of the work, which again explores the complex interplay between a sensitive, internal humanity and its public face. Like the naval cadets, the businessmen, contemporary symbols of power and authority, express potential layers of tenderness and even powerlessness in a personal theatre of dress play’. They are helplessly drawn into a paradigm perhaps to some degree beyond their grasp; becoming signifiers of an agenda sadly alien to the world of business.