The Utopian Union of the Unemployed is a project that brings together poets, refugees, academiks,migrants, artists and institutions in the united aim of developing a pilot model for a new type of a perforative laboratory that exists at the junction of art, economics, progressive pedagogy and the social sciences. The goals and objectives of the project are to research new methods to integrate newly-arrived refugees united them with local creative thinkers into the European Community.

UUU constituted as composition of meetings, collective walking, talks, reading groups, performative encounters. UUU can be resulted as art project or as a new relationships which can lead to long lasting collaboration based on friendship and trust .

These project starts on 2010 in St-Petersburg from the process of making video of the coinciding behaviour of the Ballerinas and Migrants from the Uzbekistan who are coming to Russia to work at the low payed and most unpleasant jobs. The idea to work with binary oppositions came from the study of the dialectical approach of the state of things .

Here is the piece of the text from these project: Our basic concept is to explore cultural encounter through the interaction between two different groups, one elite and another precarious and marginalised. For example, in Russia we are planning to bring together ballerinas and construction workers. Russian classical ballet by many is perceived as the quintessence of Russian cultural tradition, and a major cultural ‘export’. As an art form, it is characterised by the desire for order, beauty and harmony. As a cultural phenomenon, however, ballet incorporates the idea of empire, power and discipline. As an institution, it continue to be dominated by ethnic Russians. Construction work, to the opposite, is perceived as polluted, disorderly, and undesirable activity. Like in many other countries, construction workers come from undocumented migrant background, and are received with disrespect and exclusion.

In the case of Russia, we would like to make these groups to collaborate: ballerinas will come to construction sites and to observe and participate in the work done there. They will be trained and supervised by construction workers. The migrant workers from construction sites will visit Vaganov School where they, in turn, will learn the language of ballet. Each set of participants will produce an item – a dance which might lead to the installation – expressive of the difference in professions and life styles of the groups. The process will be filmed and participants interviewed after each session. 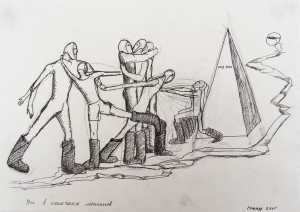 The sketch to the performance of the  Utopian Unemployment Union N4 . Relating with the chto delat song spiel “The Nederland’s 20XX “